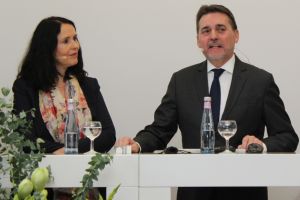 The GWW Chairman, Frank Dangmann, revealed the latest turnover figures at the PSI Press Conference. On the left in the photo: The Parliamentary State Secretary, Elisabeth Winkelmeier-Becker (CDU).

D – After making a turnover of 3,65 bil. Euros, the German promotional products industry achieved a record result in 2019. The 3.6 bil. Euro-mark was exceeded for the first time, a 2% increase was recorded compared to the previous year (3.58 bil. Euros). Following tradition, Frank Dangmann, Chairman of the German Promotional Products Association, GWW, announced these figures during the PSI Press Conference on January 7, 2020. They are the outcome of the Promotional Products Monitor 2020 that was carried out by the market research company, DIMA, on behalf of the GWW. In the course of the survey, advertising companies from Germany are questioned about their expenditure for promotional products.

The big companies in particular increased their budgets for promotional products last year, whereas a decline in the expenditure on haptic advertising was recorded among the micro companies with less than ten employees. A positive note: Above all the large companies are expecting the spending on promotional products to increase over the next five years. The implementation of high-quality promotional products is on the decline: 97% of the advertising expenditure is spent on give-aways costing up to 10 Euros – seven years ago this figure was only 71%. In his comments, Dangmann primarily put this down to the existing taxation legislation, in particular down to the obligation to record promotional products that are worth more than 10 Euros. The GWW is working on having the problems regarding the way promotional products are treated according to tax law addressed in the bureaucracy relief act. Dangmann was backed up by the Parliamentary State Secretary, Elisabeth Winkelmeier-Becker (CDU) from the Federal Ministry for Economic Affairs, who was also present at the press conference and who in this connection said that the record keeping obligation required a “disproportionate bureaucratic effort”. “It is without doubt worth checking this,” stated Winkelmeier-Becker, who reckons with a possible resistance against a simplification on the part of the Finance Ministry.

The Promotional Products Monitor also provided figures on the major trend, sustainability: For example, for 65% of the companies interviewed sustainability plays a role when purchasing promotional products, 73% are prepared to pay up to 10% more for sustainable items, 11% even up to 20%. Whereby more than half of the companies would reduce the order volume in order to save the resulting additional costs. “I am impressed how the promotional products industry has anticipated and pushed this development,” stated Dangmann and at the same time warned that people shouldn’t let themselves be influenced by media hypes too much. Plastic for instance is often banned, although disposable products made of plastic from a German value chain are often much less harmful to the environment than possible alternative products.