E – The 6th edition of the C!Print and CTCO Madrid took place at the Pabellón de Cristal at the Casa de Campo in the Spanish capital from September 24-26, 2019. According to the official figures, more than 11,700 trade visitors met up at the trade fair for visual communications, printing technologies and haptic advertising that is organised by SC6, a subsidiary of the French 656 Group (CTCO, C!Print, Premium Sourcing). There were around 50 first-time participants among the approx. 200 exhibitors from the areas digital printing and textile embellishing, signmaking, graphic and haptic advertising. As in the past years, around 40 suppliers of promotional products and textiles presented their wares and fares in the CTCO Area. 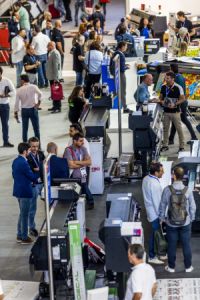 More than 40 lectures, workshops and podium discussions featuring in some cases famous speakers as well as diverse special zones formed the basis of the supporting programme of the trade show. For instance workshops on the theme personalisation were staged in the “Plug & Play Area”: An online shop was installed in collaboration with the software suppliers Photo Center 3D, where the visitors were able to place orders and subsequently watch the production of the items live. The “C!Sign” Zone was dedicated to light communications and signmaking, whereas “La Plataforma” demonstrated examples of application for personalised advertising spaces, interiors and products – an offer that especially targeted architects, designers and communication agencies.

Furthermore, the trade fair offered two new entertainment areas: The implementation of a communication campaign based on the fictive beverage brand “Cruz Cactus” was illustrated – including the packing, signs, promotional products, textiles and wrapping. Furthermore, next to the CTCO Area haptic advertising trends were presented on a special area sponsored by European Sourcing, from among which the visitors were able to choose their favourites. The Visitor’s Choice-Award went to Xoopar with the Bluetooth speaker, Mini Xboy.