Globe Hope has been breathing new life into old materials for 16 years: In Nummela near Helsinki discarded work clothes, textile remains, old advertising banners and many other raw materials, which would otherwise land in the garbage are processed into high-quality bags and accessories. Globe Hope has also made a name for itself on the promotional products market with its upcycling ideas. 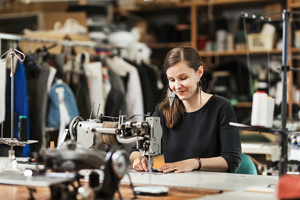 Globe produces in Finland and Estonia. Prototypes are sewn together at the headquarters in Nummela. 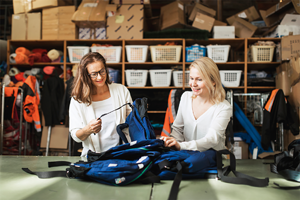 A team of experienced designers develops upcycled advertising messengers together with the customers.

In the meantime, the word has spread that the fashion industry doesn’t demonstrate the best sustainability balance. More and more consumers are rethinking their clothes consumption and even the discounters are increasing their efforts towards more sustainability. At the end of the 1990s, the situation was still very different: The fast fashion wave was just really taking off and had also hit Finland. A development that Seija Lukkala followed with concern. The fashion designer, who worked for a famous manufacturer of winter coats at the time, started questioning the modus operandi of her industry: “As is also the case today, back then many brands brought out new collections every month, which the customers discarded and disposed of just as quickly. The manufacturers themselves throw away large quantities of fabric every day. Even though there are many great materials that are actually still immaculate among them. I decided to take a different approach and was convinced that there would be a market for my idea.” Lukkala was not only a pioneer in Finland with her first collection, but indeed throughout Europe: “When I presented my first collection made of used hospital and army materials at the Finnish trade show, Vateva, in 2003, the reactions ranged between shock, surprise and enthusiasm. A short while afterwards the first companies became aware of our products, because environmental protection was already a big theme in Finland at the time.” In 2005, Globe Hope produced mobile phone sleeves and bags out of old imitation leather left-overs for Nokia for the launch of a new telephone, which were sent out to London, Singapore and Chicago for press events. Many other upcycled corporate ambassadors followed over the course of the years – whether laptop bags made from Swedish army raincoats and seat belts for Continental, promotion and merchandising items for Finnair made of discarded uniforms of the flight crew, whether card cases made of trade fair carpets and left-over leather for the beer brand Ginger Joe or cool boxes made of grain sacks for Gold & Green Foods, a Finnish manufacturer of vegan meat substitutes. 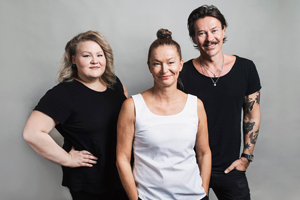 Globe Hope makes 60% of its turnover on the B2B market, which often takes on the function of a trendsetter and also increases the recognition level of the upcycling specialists among the consumers. The retail market accounts for the other 40%. In addition to retail outlets at the company’s headquarters in Nummela and in Helsinki, they also engage in cooperations with the retail trade, i.e. with Stockman, the largest Finnish department chain store. “The online business is growing too,” the Marketing & Communications Manager, Miisa Asikainen, added. Globe Hope has received several awards for its innovative, sustainable ideas: In 2005, Amnesty International elected Globe Hope as “Designer of the Year”, in 2006 the company was distinguished with the Finland Award for Arts and Culture by the Finnish Ministry of Culture. Finally, in 2013, the bag collection Wayne the Workman produced from old workwear won a Promotional Gift Award.

Materials with a story

Whereas former collections also included items of clothing, today Globe Hope completely concentrates on bags and accessories. The ideas, designs and patterns come into being in the company’s head office Nummela, this is where the prototypes are also sewn together. A team of experienced designers draws up the new items, advises the B2B customers regarding the implementation of their upcycled advertising messengers and often lets itself be inspired by the source materials: “It frequently begins with a material and its specific characteristics and patina and then we contemplate what we could make out of it,” explained Asikainen. One employee is continually on the look-out for new, interesting raw materials – from old uniforms, workwear, sails, seat belts, strips of canvas, fabric and leather left-overs through to curtains, discarded advertising banners, car tyres, records or computer parts. “In the meantime, we have many contacts, who know what we are looking for,” said Lukkala. “What many companies are not aware of: Most of these materials are not free of charge, we actually have to pay for them. As well as for having them cleaned, which is in some cases very costly.” 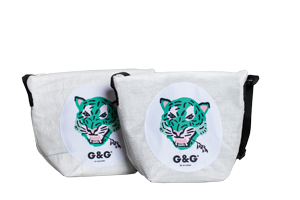 The items are produced either in Finland directly or in a partner factory in Estonia. Globe Hope also places importance on a sustainable approach as far as the production is concerned and doesn’t make any compromises at all regarding the quality and durability of its products. The company stores the source materials in a spacious warehouse in Nummela. “We additionally like implementing many of the company’s own materials in the promotional products sector, because these accurately convey their own DNA in a natural way and further increase the upcycling character in the true sense of the company,” stated Asikainen, “but of course we not only produce custom-made designs, we also offer a wide range of finished products that we individualise to suit the respective customer.” Ideally also on board: The Globe Hope logo for a strong co-branding effect as well as a hangtag, which explains the “history” of the product – storytelling at its best. The latest product line that Globe Hope sells under the name Globe Hope Cosmetics also relates stories. The high-quality skincare products are produced in Helsinki by the innovative beautician Mia Höytö from purely organic ingredients. A totally new world of products, which nevertheless fit in perfectly with the upcycling collection. After all the latter not only looks back at the past, but also ahead to the future – namely to a better future.