A – This year’s Summer Meeting of the Austrian Promotional Products Distributors Association (VÖW) took place in Gosau on June 26 and 27, 2019. The focus of the event that was attended by over 120 VÖW members, was on a professional exchange – both in practical and scientific terms. In this way, a podium discussion on the third VÖW survey kicked off the first day of the Summer Meeting. The research work carried out on behalf of the association by the Institute for Marketing & Consumer Research (m.core) at the Vienna University of Economics and Business (WU) determined in a representative survey the most popular characteristics of promotional products from the consumers’ point of view. The two students, Theresa Schmidt and Markus Rischka, who were significantly involved in the survey were present to answer the questions of the attendees. This was followed by a trip to Hallstatt, the UNESCO world heritage site. 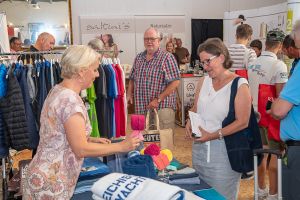 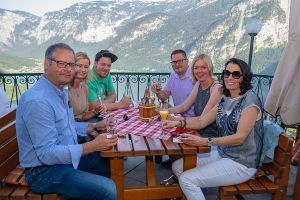 On the second day, after a lecture on the theme digitalisation, the exhibition of the promotional products suppliers affiliated to the VÖW took place. 41 exhibitors presented extracts from their product ranges at the Vitalhotel in Gosau. A rustic evening in a log cabin which some of the guests attended clad in traditional costumes rounded off the day. 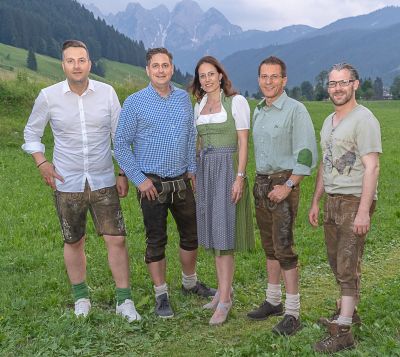 The new VÖW Board (f.t.l.): Vice-President and Secretary General, Christopher Hitsch; the President, Klaus Pohn; the advisory counsellors Kathrin Schneider and Gerhard Mittermaier together with the Secretary of the association, Roman Klucsarits.

Furthermore, a new VÖW board of directors was elected during this year’s Summer Meeting: Klaus Pohn (Istac Promotion, A-Pasching) was confirmed in his role as President of the association; Christopher Hitsch (Werbegaben Wolfram Hitsch, A-Hallwang) is the new Vice-President and Secretary General. Stefan Radlgruber (Radlgruber Werbegeschenke, A-Graz) is the new Finance Director. The two advisory counsellors Kathrin Schneider (The Five Elements, A-Leopoldsdorf) and Gerhard Mittermeier (Five Points Promotion, A-Wien) complete the board. Karl Lehr (VÖW honorary member) and Walter Pauger (Werbeartikel Pauger, A-Sinabelkirchen) were appointed as cash auditors. The election of the new VÖW Board was approved unanimously.

The “Vision 2020” was also on the agenda of the Summer Meeting: In coordination with the authorities, the association is currently working on creating an own job description for promotional products distributors. Moreover, increasing the quality awareness within the industry, accentuating the promotional product within the marketing mix and positioning the brand VÖW in the public’s eye also have top priority. “It is about proactively shaping the future,” stated Pohn. “We have initiated internal task forces for the most important association activities and to organise training measures for the employees of VÖW members. In future, VÖW will position itself even more strongly in Austria as a contact partner for representatives of the advertising industry.”