CH – The meanwhile fifth edition of the marke|ding| Switzerland was staged at the event location Samsung Hall in Zurich on March 13, 2019. “We were able to welcome 93 exhibitors this year including the seven sponsoring agencies – last year the number of exhibitors was 74 in total,” explained the organiser, Michael Mätzener. “Of the haptic advertising suppliers, 43 came from Switzerland, 35 from Germany, eight from the Netherlands, four from Austria and one each from Turkey Portugal and Poland. The visitors registered precisely that the show offered 24 new suppliers compared to the previous year, including several start-ups, and were very pleased about this.” The whole spectrum of haptic advertising was covered, alongside innovative start-ups, established specialists and well-known full-range stockists were equally represented. 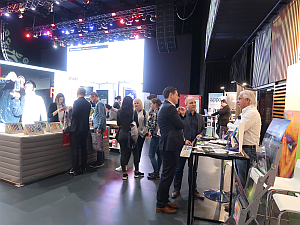 In total, 948 visitors attended the fifth edition of the marke|ding| Switzerland and gathered advice from the 93 exhibitors. 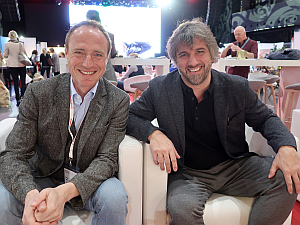 The makers of marke|ding|: The organiser in Switzerland is Michael Mätzener (r), the Austrian edition is under the direction of Martin Zettl.

The sponsoring agencies comTeam, CPT, diewerbeartikel gmbh, E7 promotion, KW open, Pandinavia and Polydono welcomed their guests in the foyer and in some cases accompanied them to the exhibition stands where often intense and concrete discussions were held. According to the organisers, 948 visitors were recorded (2018: 972 visitors).

A crowd-puller in the coffee lounge proved to be a machine that served coffee in edible, vegan cups – which was decorated with the portrait of the ordering party. To this end, a portrait of the coffee drinker was taken using a mobile phone, which was subsequently sent to the machine via Bluetooth, the integrated printer of which in turn applied food-safe dyes to the surface of the coffee. The lecture and discussion programme, which addressed haptic advertising themes, was also well-attended.

The next edition of the marke|ding| Switzerland is scheduled to take place on March 11, 2020 once again at the Samsung Hall Zurich under the motto “Show Time”. A further report on this year’s edition will be published in eppi magazine No. 128 (April 17, 2019).