PL – The 15th edition of the RemaDays Warsaw was staged from February 13-15, 2019 at the Ptak Warsaw Expo Nadarzyn exhibition complex – approx. 30 km outside of the capital city – in Halls E and F. This year’s edition of the largest printing and promotional products trade fair in Eastern Europe was able to record an increase in the number of exhibitors. Sławomir Giefing, CEO of the organisers, GJC International: “We have several new exhibitors this year, especially in the haptic advertising section, which meant we had to expand the exhibition space somewhat. In total, we have 810 exhibitors from 28 countries here.” According to the official figures 21,112 visitors (2018: around 20,000 visitors) from 54 countries accepted the invitation and were given professional advice from the exhibitors. The aisles and the exhibition halls were already bustling on the first day of the show. On the second day of the trade fair – traditionally the most well-attended of the three-day event – the trade show was so well-frequented that it was difficult to even get to the respective stands of the exhibitors. 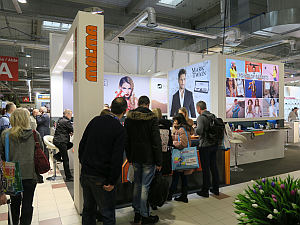 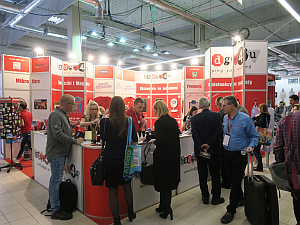 The exhibition is divided up into eleven segments: Gifts World, POS & Display, Technology Park, Printing House, Packaging Materials, Photo Creation, Lighting Systems, Event Show, Textile Zone, IT & e-Solutions as well as Outdoor Advertising. The suppliers of haptic advertising make up the lion’s share of the exhibitors. Hall E was completely dedicated to this segment, but many promotional products players also exhibited in Hall F. Alongside the big, international full-range stockists, many small specialists ensured that there was a diversified and very interesting exhibitor, service and product mix. The supporting programme included among others the presentation of the “Gifts of the Year”, “Prize for Innovation” and “Korony Reklamy” (advertising crown) Awards. The “POS of the Year” was conferred for the second time.