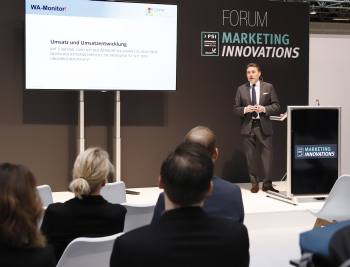 GWW President, Frank Dangmann, presented the results of the current Promotional Products Monitor and of the impact study at the PSI Show in Düsseldorf.

39% of all Germany companies implement promotional products, according to a further cognition of the survey, which also foresees a positive outlook for the future: 92% of the respondents are anticipating that their company will spend the same or an increased amount on promotional products over the next five years.

In the view of the success of haptic advertising in the digital era, the GWW President Frank Dangmann talks about a “haptic counter-revolution“: “Today, in the era of digital reproducibility and popularity, people are looking for brand experiences that are real and multisensory. A mega trend, that naturally has a positive effect on the promotional products industry.” The GWW will publish the complete survey on advertising impact shortly.

As the “Industry Structure Analysis 2017-19”, which was also presented at the Opening Press Conference of the PSI Show, reveals, a total turnover of 14.9 billion Euros is generated by haptic advertising annually. The Techconsult survey, carried out in cooperation with the PSI and which is supported by 13 partners and associations in total, is according to own accounts the first empirical survey on the European promotional products industry. To this end, data on the number of promotional products companies, market volume and turnover according to selected commodity groups was collected in ten countries in the scope of several surveys.