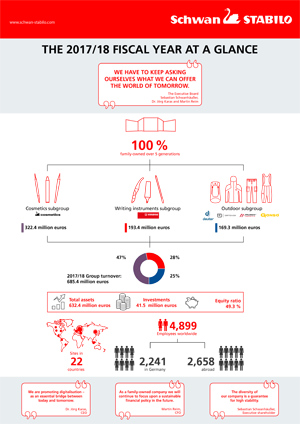 D – The Schwan-Stabilo group has announced its balance sheet figures for the past fiscal year (closing date: June 30, 2018). After years of growth, with a total of 685.4 mil. Euros in the three divisions Cosmetics, Writing Instruments and Outdoor, the overall turnover of the family-run company that is already in the fifth generation was slightly down compared to the previous year result of 713.5 mil.

The company’s investments in the past fiscal year totalled 41.5 mil. Euros (previous year: 69.2 mil. Euros). Around half of which is invested in Germany. The expansion of the production site in the Czech Republic accounted for the majority of the investments abroad. The number of employees declined slightly. On the closing date, 4,899 people were employed within the group worldwide (previous year: 5,019).