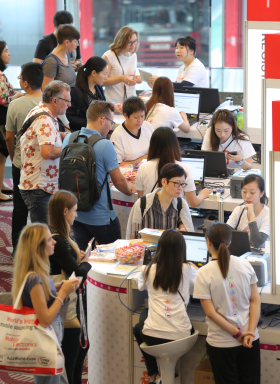 CN – This year’s edition of the Mega Show was held from October 20-23, and from October 27-29, 2018 at the Hong Kong Convention and Exhibition Centre. With according to the official figures, 51,524 visitors from 133 countries and regions, the event that is jointly organised by ComAsia and Mega Expo (Hong Kong) Limited attracted increased interest compared to the previous year (2017: around 46,000 visitors). 3,936 exhibitors from 33 countries and regions presented their novelties at 5,164 stands and underpinned the reputation of the Mega Show as one of the most significant sourcing shows in the Far East.

The first phase of the Mega Show is divided up into the exhibition areas, Asian Gifts & Premiums Show, Asian Housewares & Kitchen Show, Asian Toys & Games Show as well as the Asian Festive, Christmas & Seasonal Show. Whereas the 2nd phase was dedicated to the Asian Gifts & Travel Goods Show, the Asian Stationery Show and the Asian Sanitary & Bathroom Accessories Show. In spite of the ongoing uncertainties with regards to the trade relations between the USA and China, with an attendance of 38,960 visitors the first phase achieved 4.1% growth compared to 2017. With 12,564 visitors, the second phase recorded a 4.1% increase compared to the previous year result. In addition to the usual guests from the USA and Europe, the organisers reported higher numbers of visitors from countries like Russia, Brazil, Mexico and South Africa. A special highlight this year was the return of the popular exhibition zones Design Studio and Asian Designer Start-ups. Two seminars on the theme “E-Commerce & E-Sourcing” and on the economic market changes and challenges for Asiatic exporters were new on the agenda.

The next Mega Show is scheduled to take place from October 20-23, and from October 27-29, 2019 once again at the Hong Kong Convention and Exhibition Centre.