D – Obviously last year’s changed venue date in the autumn paid off: This year’s edition of the HSV Merchandising Show was held on November 14 and 15. Formerly scheduled in January, the event often collided with other important show dates – among others the PSI Show in Düsseldorf. According to official accounts, at the 17th edition more than 100 exhibitors presented on the 2 and 3 levels of the East Stands in the boxes, aisles and adjacent rooms of the Volksparkstadion in Hamburg. The exhibitors and visitors – merchandising and marketing specialists, buyers of football or sports associations, but also from the trade and industry – were offered a fascinating view of the playing field at the impressive location that boasts a specific spirit. During the event, the grass of the stadium was “sunned” using special machines. 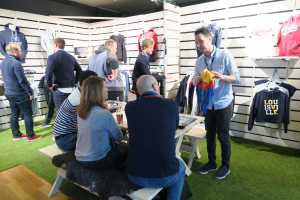 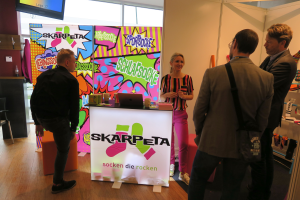 Unlike last year – when the focus clearly lay on balls and their embellishment in the light of this year’s Football World Cup – the items exhibited were not dominated by specific products. There was a balanced mix of sport-related items and line-ups as well as services to do with customising and individualising. However, the presence of a multi-faceted range of textiles did stand out. As usual suppliers, importers or manufacturers that are active on the haptic advertising market were among the exhibitors, including full-range stockists, but also specialists. Several well-known trading agencies also flew their flags and offered among others merchandising and full-service concepts. At the time of going to press the official attendance figure was not available, however by all accounts great interest prevailed on the first day of the event. The visitors and exhibitors alike praised the casual, pleasant atmosphere – the trade fair, at which many of the participants have known each other for years, is considered to be a “family get-together”.