D – From November 13-15, 2018 the BrauBeviale was held at the Nuremberg Exhibition Centre. According to the official figures, 1,094 exhibitors presented their offers from the entire process chain at the important show for the beverage industry. The share of participating companies from abroad was 582 exhibitors from 46 nations, which corresponded to a share of 53%. The offer ranged from raw materials, to technologies and components, through to packaging, accessories and marketing ideas. A multifaceted supporting programme rounded the event off. Among others the European Beer Star 2018 was awarded – of the 2,344 beers submitted an expert jury elected the winners in 65 categories in the run-up to the show. 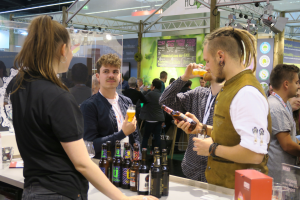 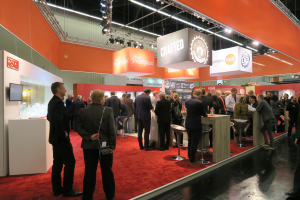 “This BrauBeviale has exceeded our expectations,” confirmed Andrea Kalrait, Director of the BrauBeviale, which is organised by the Nuremberg Exhibition Centre and which is supported by the Association of Bavarian Private Breweries e.V. in its capacity as the show’s industry sponsor. Over 40,000 trade visitors (2016: 37,923) – of whom 34% came from abroad – travelled to Nuremberg according to official accounts.

In line with the trend of the previous years, less and less promotional products players were present. Whereby above all glass embellishers and the suppliers of brewery-related items, including both manufacturers and importers or trading agencies exhibited at the fair. However, the colourful diversity of the former events when also haptic advertising companies from the textile sector, playing cards, promotional products from the event segment and original give-aways were presented, seems to have become a thing of the past.

The next BrauBeviale is scheduled to take place in Nuremberg again from November 12-14, 2019.