D – This year’s edition of Spiel came to a close in Essen on October 28 with a record attendance of according to the official figures 190,000 visitors (2017: 182,000). Spiel is considered to be the largest exhibition for board and card games in the world and with 1,150 exhibitors (2017: 1,100) from 50 countries and exhibition space spanning 80,000 m² – an 11% increase – was once again the hub of the board game world for four days. There were a remarkable number of cooperative games, where the players compete together against the game, where the focus lies on the “we”-feeling, among the 1,400 new games and world premieres. So-called unique games where the majority of all of the components contained inside the box are different in every game is a new phenomenon. 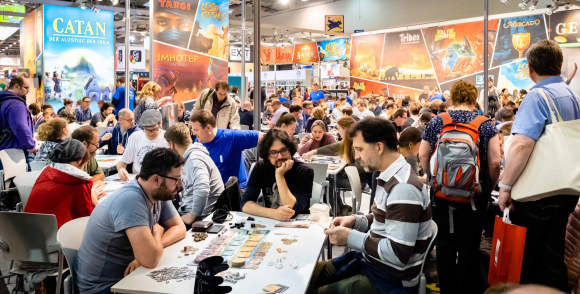 The demand for board and card games has increased strongly over the past years in spite of the progressing digitalisation that has brought mobile phone console and computer games with it. “The fact that we are able to attract so many enthusiastic visitors from all over the world and present so many wonderful games proves that we are living in a golden era of parlour games,” summed up Dominique Metzler, Managing Director of the organisers, the Friedhelm Merz publishing company. Spiel ’19 is scheduled to take place at Essen Exhibition Centre from October 24-27, 2019.