When Jacob Ritter opened his company, a newly constructed box factory, 90 years ago – on September 15, 1928 – he couldn’t possibly have imagined that he had laid the foundation for an extremely successful, meanwhile internationally-operating family business.

“My grandfather didn’t get on very well with his father, who had been running a small furniture factory and wood processing company in Brensbach since 1876,” explained Arno Ritter, managing partner of Ritter-Pen. Jacob Ritter was interested in technology, had a passion for mechanical and electrical engineering and during the First World War volunteered to become a pilot so that he could experience the latest technological developments in that area close-up. He couldn’t put his newly-acquired knowledge to use in his parent’s company after the war, so he founded his own company. 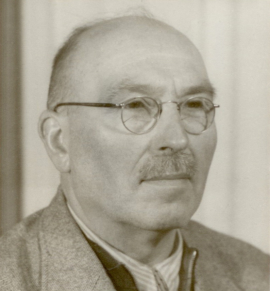 The company founder, Jacob Ritter had a passion for mechanical and electrical engineering.

Initially the focus lay on wood processing, primarily wooden boxes were made. The economic crisis at the end of the 1920s and the related general decline of the wood-processing industry made a realignment necessary. Jacob Ritter decided to change industries or rather to expand his company to include the processing of thermoplastic materials. The result was “Jacob Ritter KG Plastic Products • Wood Products Factory”, according to the company sign. The individual company had in the meantime been transformed into a family limited partnership. In 1933, Jacob Ritter purchased a Bussmann press that featured the latest technology and he developed a sales programme which included razors with the respective cases and accessories, powder compacts and jewellery cases – also in sophisticated executions. “At the beginning of the Second World War, my grandfather – who was incidentally always actively supported by his wife Katharina also during the difficult development years – and a large part of the staff were conscripted to produce armaments at a different factory,” recounted Arno Ritter. “However, he succeeded in getting himself and his workers liberated from the obligation to do service because he was able to make the authorities believe that he had to complete important assignments – I think it was boxes for the Red Cross. In any case, the company remained in operation and survived the Second World War.”

After the war was over, one started looking back on tradition and took up wood processing again. In addition to cupboards and chests, the housings for TVs were also produced – at the time an absolute luxury item. Parallel to this the company placed its bets on the processing of the modern material, plastic. For instance, one moulded buttons and cigarette tips out of the material and sounded out the possibilities of a new, future-oriented production programme. Jacob Ritter and his son Wilhelm, who had joined his parent’s company after the Second World War, agreed to dedicate their efforts to the production of writing instruments, in particular to ballpoint pens made of plastic.

The beginnings of the ballpoint production

In 1948, one commenced with the production of writing instruments and refills – in collaboration with an associate automat turning company. There were problems predominantly with the writing paste, however the company started selling products in 1948 and from 1949 onwards the writing instruments were presented at the first big exhibitions in Frankfurt and Hanover. From 1950 on, exclusively writing instrument barrels were manufactured, the first retractable ballpoint pen with a plastic mechanism was introduced onto the market in 1956.

The 1960s were characterised by the expansion of the firm, for example the buildings for the moulding unit and the tool-making shop were built. “The year 1972 is a milestone in our family history,” said the Managing Director, Jürgen Riedel – who has incidentally been with the company for over 30 years. “Because it was the year of inception of the legendary ballpoint 280 pen, which made up part of our line-up for 25 years and which set new standards in writing culture. Here a nice example of Ritter-Pen culture is demonstrated: Our in-house graphic department has namely carefully modernised this legendary writing instrument, picked up on the characteristic features, such as for instance the pusher and the dynamic contour of the clip and re-interpreted them. The result is a classic of modern design that is functional and yet still displays its own aesthetics. Our writing Instrument Club is the contemporary interpretation of the ballpoint pen 280 from the year 1972.”

At Ritter-Pen one relies on continuity and progress, on the specific know-how and creativity of the employees – a high number of the around 120 employees on-site in Brensbach have been working for the company for years, if not for decades. They form an essential element of the style of the company – which is not only recognisable in the typical style of the writing instruments produced on-site. This includes the specific spirit at Ritter – an exceptional corporate culture, which is characterised by the unconventional, almost family-like behaviour among the workers and the extremely flat hierarchies. “We place great value on a good work environment, satisfied and enthusiastic employees and on continuity among the workforce,” explained Riedel. 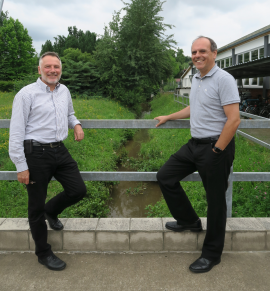 Continuity also characterises the management of the family business. Arno Ritter, today’s owner, took over responsibility for the company in 1994 and has consistently pushed the expansion course. “Our structures – also those of the company premises – have grown and are expedient,” explained Riedel. “We achieve continual, organic growth of between 3% and 5% annually, generally train our own apprentices and regularly invest in the optimisation of our machines and workflows. In addition to the specific style, special materials and quality of our writing instruments, haptic aspects also play an outstanding role. For example, we already invested in the technology of the two-component injection moulding over 30 years ago and purchased the corresponding machines. This marked the beginning of a whole row of particularly anti-slip and attractively designed lower parts of ballpoint pens. The relatively simple, yet extremely functional gripping elements of the Diva or 900 ballpoint pen literally got the ball rolling. In addition to the KS Club, which is in the meantime even considered to be a cult ballpoint pen by some people, highly-complex TPE gripping parts also come as a material mix with ABS. A further cutting-edge two-component injection moulding machine was recently integrated into the machine room for the novelties, Atmos and Ellips.”

The company premises in Brensbach encompass around 16,500 m², approx. 11,000 m² of which is used as production space. If necessary, the facilities can be extended at any time, as was continually the case in the past – which is graphically corroborated by historic aerial view photos from the 1950s and today. Everything is produced here on-site under one roof – from the tools made in the company’s own locksmith’s shop, to the injection moulding and assembly, through to the imprinting or embellishing, picking and packing and the dispatch. In the injection moulding department for instance around 40 machines with a holding force of between 25 and 220 t are in operation. The on-site customising is carried out using pad and screen-printing machines, foil transfers are also offered and modern machines with UV drying facilities are also available. Ready assembled ballpoints are not stored, but instead the diverse, freely combinable components, which allows a totally unlimited spectrum of different variations. Arno Ritter: “Around 110 mil. individual parts are constantly stocked here on-site. This contributes enormously towards the flexibility and extremely fast delivery times. Thanks to our own sample making shop – one can choose between the colours offered for each separate part – as a rule the samples are sent out the next day after being ordered by the distributor.” Certain customising options – i.e. laser engravings – are not carried out in Brensbach, but instead on the “extended workbench” in Poland and the Czech Republic, where Ritter-Pen is present with its own subsidiaries. 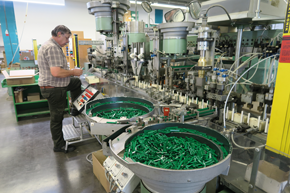 Everything is produced under one roof – quality “made in Germany”.

Furthermore, the company has been producing in Ningbo, China since 2001, at its autonomous subsidiary Ningbo Ritter Stationery Ltd. Promotion Co. “Here writing instruments such as the Color Star, for instance, which is favourablypriced and yet convincing in terms of its quality, are manufactured,” explained Riedel. “The writing instruments made and customised in our factory in China are listed under the Ritter Global label in our extensive catalogue.” Otherwise, all of the ballpoint pens from Brensbach carry the “Made in Germany” seal, everything is produced in-house, only the refills and tips are purchased elsewhere. 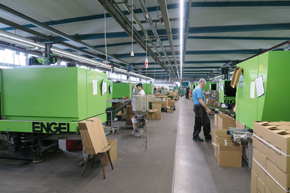 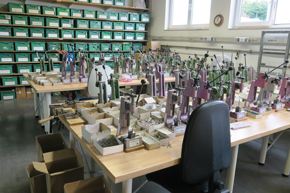 Responsibility for the environment

The company originally only supplied parts to its present day rivals and didn’t start targeting the promotional products market until 1998 when it was represented with an exhibition stand at the PSI Show in Düsseldorf for the first time – Arno Ritter: “In retrospect this turned out to be an excellent strategic decision!” Ritter-Pen also takes on a pioneering role as far as environmental protection and sustainability are concerned.

In 2008, the company was already distinguished with the innovation prize “Organic material of the year 2008” for ist Bio-Pen writing instrument series that it jointly developed together with the Fraunhofer Institute and which is based on “Biograde®”. Riedel: “This is a transparent, organic plastic based on cellulose that is suitable for the injection moulding process. Unlike materials that are made of raw materials obtained from maize, it has an extraordinarily positive life cycle assessment. Our bio pens are made of this material to 80%, only the case of the mechanism and the mechanism itself are still made of ABS.” At the company’s premises in Brensbach, high value has always been placed on producing as environmentally-friendly as possible. “Within our company, ‘organic’ goes without saying, Riedel reported, “production that is as natural as possible and consideration for the environment are matter of course for us. The river Brensbach with its sparkling clean water and fish swimming around in it, doesn’t run through the middle of the premises of Ritter-Pen without good reason.” 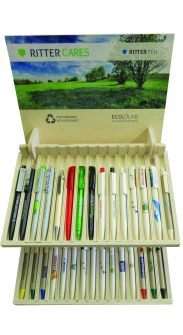 Under the brand, Ritter Cares, sustainable writing instruments are being offered. The Crest Recycled is made from “post consumer recycled plastic“.

So it is only consistent that Ritter-Pen is intensifying its environmental and sustainable approach and is underlining this in the form of the recently created own brand, Ritter Cares. Ritter Cares unites all sustainable writing instruments from the Eco line – from the classic Carton, the first ecological ballpoint made of recycled cardboard, through to the Bio-Pen made of regrowing cellulose acetate. A newcomer to the line-up is the Crest Recycled, a promotional ballpoint made of single origin ABS plastic, which is gained from waste that is rich in plastic – i.e. vacuum cleaners, household appliances and machine tools. Using a special method, all of the plastic parts are separated, shredded and processed into the “second life” production granules using state-of-the-art technology. Arno Ritter: “The positive side-effect of the ‘post-consumer recycled plastic’ is an 80% saving of energy for the production process compared to plastic produced conventionally using crude oil.” The Crest Recycled comes in the colours black and light grey, there is a choice of 27 standard shades for the pusher made out of conventional ABS. As such, Ritter-Pen is completely re-defining the theme recycling in the writing instrument segment. After this recycling innovation, it is going to be exciting to see what further innovations Ritter-Pen has in store up until its next “round” birthday – the 100th anniversary of the company.