UK – This year’s September edition of the Merchandise World was staged in Farnborough, England on September 12, 2018. According to the official figures, 131 promotional products suppliers exhibited at the Farnborough International Exhibition Centre, 25 of whom were first-time exhibitors. In addition to renowned British companies, manufacturers and importers from Europe also gave an insight into their product ranges.

The Merchandise World is a joint initiative of the British industry service provider, Sourcing City, and the BPMA (British Promotional Merchandise Association). The exhibitors can either occupy conventional exhibition stands or special “Conversation Pods” for discussions that are booked in advance. According to the organisers, a strict admission policy guarantees that the quality of the visitors is high. Many of the exhibitors confirmed the quality of the contacts. According to the organisers, 400 representatives of the British promotional products trade attended this year’s September edition of the Merchandise World. At the premiere of the trade fair in September 2017, around 200 suppliers and 521 distributors took part, in the meantime however the number of exhibitors and visitors is divided up between two editions in the year. 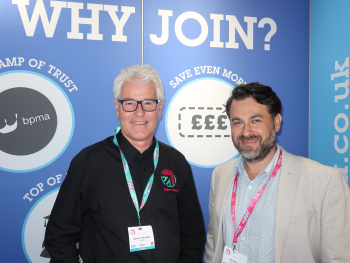 According to BPMA, the Brexit Summit also met with a good reception, which the trade fair had invited guests to attend on the eve before the show. Four experts shared their opinions on the theme as well as giving value business tips in the light of Britain exiting the EU: Allie Renison (Head of Europe and Trade Policy Institute of Directors), Lesley Batchelor (Director General Institute of Export & International Trade), the parliamentary representative Tom Brake (Liberal Democrats) as well as Christopher Mills (Managing Partner Harwood Private Equity and Business Speaker of the UKIP) gave their stances on the theme Brexit. Lively discussions accompanied the summit, before the evening culminated in a networking event, which according to Sourcing City more than 250 guests took part in. The January edition of the Merchandise World is scheduled to take place on January 30 and 31, 2019 at the NAEC in Silverstone.