D – As the “family get-together of the industry” and the only promotional products trade fair in Germany, which is exclusively open to qualified members of the promotional products trade, the GWW-Trend enjoys an exceptionally good reputation among the suppliers and consultants. The 32nd edition, which was held in Wiesbaden on September 14, no doubt contributed towards further enhancing this reputation. According to official accounts, 144 exhibitors (+17% compared to the previous year) welcomed 605 visitors (+13%) at the RheinMain CongressCenter (RMCC), to present their product novelties and trends and give the trade the opportunity for intensive consulting discussions and a constructive exchange of ideas in good time before the year-end business kicks off. As always, the mood was very friendly, almost relaxed, one noticed that the GWW-Trend is a must-attend event for the participants, which they enjoy visiting. On the exhibitor front, many renowned industry players were present – globally-operating full-range stockists as well as clearly focused specialists. The product mix covered all key segments of the market. 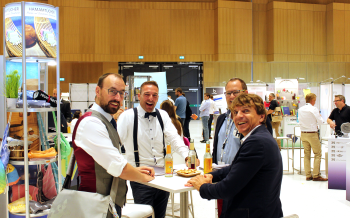 The German promotional products association GWW, which is celebrating its 25th birthday this year, already held its annual summer meeting the day before also at the RMCC. The GWW Chairman, Frank Dangmann, gave a short review of the association’s history and presented its current projects: Among others, the GWW launched a PR campaign for the promotional product, in the scope of which advertisements were placed in various trade magazines. Prof. Dr. Michael Paul from Augsburg University presented a current scientific survey on the impact of haptic advertising media, Svenja Brüxkes from the Institute for Trade Research demonstrated in the course of her speech about the “Amazon Offensive”, how the market shares are constantly shifting more in the direction of online trade.

Traditionally, the Trend organises an evening event: A champagne reception, good food, an equally inspiring and amusing cabaret appearance, as well as the opportunity to dance, were the ingredients of an evening – which just like the trade show on the following day was assessed by most of the participants to be an “all-round success”.