Its Floating Action Pens are what made the company Eskesen famous worldwide. The ballpoint pens have been produced in Denmark with an animated image inside the barrel since the 1950s – using a secret production method. 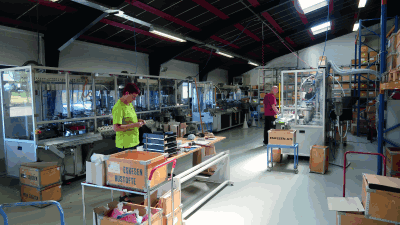 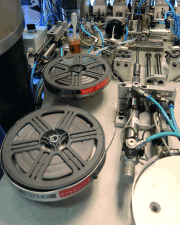 A truck chugging through the landscape. Vodka flowing into a glass. Tomatoes falling into a bottle of Ketchup. A liner cruising through the Caribbean. A spermatozoon fertilising an egg cell resulting in a baby: Eskesen’s Floating Action principle gets writing instruments and key pendants moving and turns simple give-aways into marketing tools that are guaranteed to have a head-turning effect. “Many people don’t believe that the Floating Action Pen is a Danish invention that can be produced in this country, but that is precisely what we‘ve been doing,” stated Sales Manager Susanne Christensen proudly, “for around the last 70 years.” The company that is based in Store Merløse on the island of Zealand, around one hour’s drive away from Copenhagen by car, was founded in 1946 by Peder Eskesen, who developed the Floating Action in the early 1950s – which like then is still based on a film image that moves backwards and forwards in a liquid in front of a background. “The very first model was made to order for the oil group, Esso, and contained an oil can,” the Managing Director, Thomas Koefoed, reports. “In the mid-1950s Peder Eskesen perfected the method.” He turned a special design into an innovative product that made Eskesen famous on the promotional products market far beyond the country’s borders.

The company grew up to around 200 employees, who produced Floating Action Pens for worldwide markets. Further products such as key pendants were added to the line-up. In 2003, Eskesen had to file for bankruptcy and make numerous employees redundant, then just afterwards there was the economic crisis, which rocked the company that was meanwhile under new management again. Finally, in 2013, Thomas Koefoed, the current proprietor, took over the business, three years later Susanne Christensen, who had worked for the company for around a decade, joined the management as a shareholder. 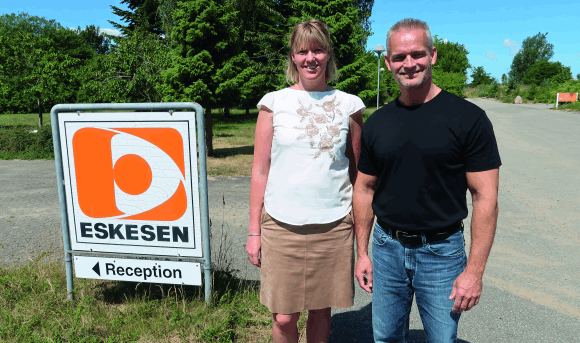 Today, with a team comprising of nine people, Eskesen is a small, flexible and agile business. The automation of further parts of the production has made many work steps much faster and more efficient: Assembly machines took over the tasks of the conventional homeworkers, the personnel and time-intensive screen printing process that was previously used to produce the floating motifs has been replaced by cuttingedge digital printing that enables the representation of filigree details in razor-sharp resolutions. “The printing quality and register accuracy that we achieve for our products is otherwise unattainable on the market,” Christensen reported proudly. For the further processing, the motifs are printed in strips, laminated, cut and subsequently applied to rolls of film. A local printing partner supplies the finished rolls of film with the inlays, the production of the key pendants and barrels is carried out on-site in Store Merløse using injection moulding. “We exclusively use highly scratch-proof and shatter-proof acrylic for the plastic parts – which means we offer a quality that is unique on the promotional products market,” explained Christensen. “Our products are practically indestructible.”

For the floating chamber the rolls of film are first of all cut and then the movable motif and the background are brought into position. Finally, the chamber is filled with medical mineral oil– which presents no risks to health – using a secret method. “The fluid ensures that the floating item can move to and fro slowly”, explained Koefoed. “Furthermore, a lens effect occurs, which lends the images a particularly stunning effect. The difficulty lies in completely extracting the air from the floating chamber so that ugly bubbles are avoided. Companies that copy our pens have not mastered this technique as yet. Furthermore, they often use water instead of oil, which means the motifs move far too quickly.” Alongside the classic Floating Action, Eskesen also fills its products with glitter, artificial snow, little balls or other miniatures on request. The ideas are only limited by the size of the chamber. A configurator on the company’s website invites the clients to experiment, here own motifs can be uploaded or created oneself quickly and simply with the aid of a template. “Our minimum order quantity is 500 pieces per motif,” Koefoed explained. “25 standard colours are available for the barrel, special pantone colours are possible for the corresponding order volumes.” In this way, Eskesen delivers items to customers all over the globe. “The USA is our largest individual market and we attend the big industry trade fairs in America every year,” stated Christensen. “In terms of turnover, the EU brings the highest revenue, but we are also very successful in Japan.”

Whereas Eskesen used to also supply the retail trade in the past, the company almost exclusively operates on the promotional products market today. “The souvenir market is an exception to the rule here, we still supply a lot of items to museums in particular,” stated Koefoed. “The merchandising sector is a market that promises large growth and potential – interestingly enough more and more bands for instance are implementing our pens in their merchandising programmes, especially in Asia.” But since that first model was produced for Esso, the clientele also includes numerous famous brands and large organisations. “Marketing departments love our pens because it allows them to tell stories in a simply way – and because they are extremely coveted items,” commented Christensen, adding with a wink: “We know at least 1,000 collectors, who specialise in the Floating Action products and customers continually report that piles of our writing instruments have been picked up from their stands at trade fairs.” This is proof of the appeal of the moving image writing instruments – even 70 years after their invention, in spite of the digital era.