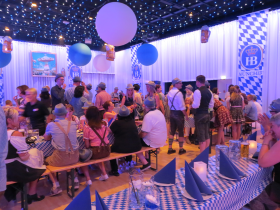 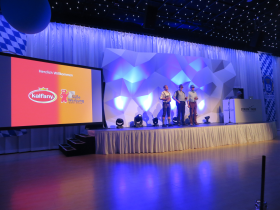 In the light of the Munich origin of the company name “Kalfany”, Kalfany Süße Werbung organised a Bavarian evening with a hearty buffet, amusing show performances and dancing at the Europa Park in Rust.

The name “Kalfany” was derived from Karl Berger, who originally registered his sweets production in the commercial register in Munich on October 23, 1948 under the name “Berger Bonbons”. However, since the company name was already patented, the entrepreneur used a combination between his and his wife’s first name Franziska (“Fanny”) and christened his company “Kalfany”. From 1952 onwards, Berger commenced with industrial production. In 1968, Kalfany started filling sweets into tins. The company already celebrated huge success with the first two varieties “sour lemons” and “summer fruits”, because according to company accounts, apart from products imported from England, no sweets were available in tins anywhere in Germany at the time. In August 1970, the company moved to Müllheim and nine years later Berger’s son Erhart took over the management of the company until the company was bought by the Zertus Group in the year 2002. In 2007, the Zertus Group purchased the company that specialised in promotional sweets, Süße Werbung, and the two companies Kalfany Bonbon and Süße Werbung were merged into the Kalfany Süße Werbung GmbH & Co. KG. and placed under the directorship of a joint management. 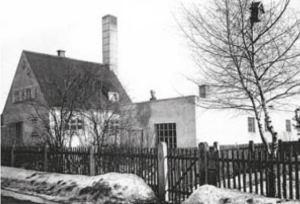 The production building of Kalfany Süße Werbung in the 1950s.

Today, the portfolio of the confectionery specialists, which has carried the IFS quality seal (International Featured Standards) since 2003, includes among others the successful brands Pulmoll, Diele, Cupper Sport and Echt Sylter Brisen Klömbjes. According to company statements, more than two thirds of the tinned sweets sold in Germany are produced by Kalfany Süße Werbung. The company employs 250 people and exports its products worldwide to over 60 countries.