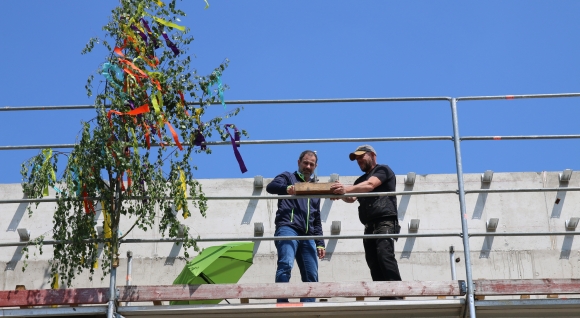 Together with the master roofer Jörn Johannsen (r), the CEO of Fare, Volker Griesel, inaugurated the new wing of the building.

D – Fare is extending its head office: The ground-breaking ceremony for a wing spanning approx. 1,000 m² at the headquarters of the umbrella specialists, which will unite the two existing buildings into one, took place in September 2017. In addition to seven new offices that will provide enough space for 16 additional employees, a large, modern cafeteria with an adjacent kitchen as well as a new, approx. 130 m² showroom are planned. A further meeting room will offer a place of retreat for customer meetings or employee seminars. According to company statements, the continuous expansion of the past years has made it urgently necessary to extend the premises. 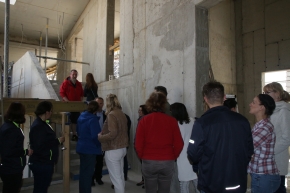 It was possible to view the shell construction during the topping-out. 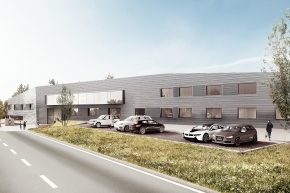 The finished building section will unite the existing individual buildings.

The topping-out ceremony was held amid totally umbrella-unfriendly weather – namely beautiful sunshine – on May 18, 2018. In the presence of the architect Bert Tilicke (tr.architekten), friends, employees, media representatives and further invited guests, the CEO of Fare, Volker Griesel, traditionally hammered in the final nail and thanked the craftsmen and the Fare team. The building is expected to be completed by the end of 2018.