NL – After its relaunch and relocation from Utrecht to Rotterdam last year, the PromZ.live was staged at the Ahoy in the Dutch trade metropolis for the second time on May 16 and 17, 2018. According to the organisers, Het Portaal Uitgevers, around 200 exhibitors including promotional products suppliers and distributors participated. The latter were much more strongly represented, which is due to the fact that the target group of the PromZ.live is buyers and marketing decision-makers from the industry. The exhibitors included numerous well-known names from the Dutch and European industry, as well as various specialists, not least for Kerstpakketten that are traditionally bestowed at the end of the year in the Netherlands. In a special zone, the 010Area.live took place for the first time, where specialists from the live communications sector presented their portfolios. 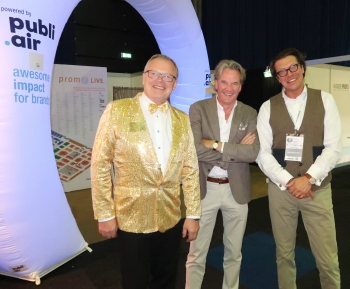 Beyond this, the organisers had once again come up with several new attractive programme items: As the according to own accounts first ever trade fair, in cooperation with Google Tours the PromZ.live provided a 360° tour through all of the trade fair areas in the run-up to the show. Thus, the trade fair can be visited as a virtual tour after the show via Google Maps. The seminar programme was held again in the form of “Silent Seminars”, i.e. the participants heard the lectures via headphones. Several special areas such as the “Specialists Street” or the “Gadget Zone” were also not missing this year, as well as the obligatory “Borrel” – the drink on the first evening of the fair. Last, but not least following tradition Het Portaal distinguished the “PromZ Products of the Year“.

With according to official sources 4,338 visitors, this year’s PromZ.live saw an increase in attendance compared to 2017 (4,095). Just like last year, the second day of the show was more strongly frequented than the first one.