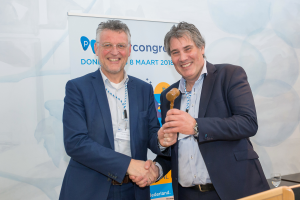 Edwin Bouman (r) handing over the Executive Board hammer to his successor Joop van Veelen.

NL – At its Annual General Meeting this year on March 8, the Dutch industry association PPP (Platform Promotional Products) elected a new Executive Board. With immediate effect, Joop van Veelen, ProComm Partners, is the new Chairman of the promotional products association. Van Veelen was already active within the PPP previously and represents the association at European level. He succeeds Edwin Bouman, who held the position of Chairman for the last three years and presides over the Board for a year. Within this period a successor will be sought, who will take over the post for a longer length of time.

Two further new members were appointed to the Executive Board together with van Veelen: Lex van den Bosch from The Cow Company and Jan Hazejager from Alpha Holland. They replace Joshua Lopez and Niels Peters, who were both active on the PPP Board for many years.

The Dutch industry association PPP unites promotional products distributors and suppliers and currently has around 250 members.