Along with viscom and PSI: Reed launches PromoTex Expo

Along with viscom and PSI: Reed launches PromoTex Expo 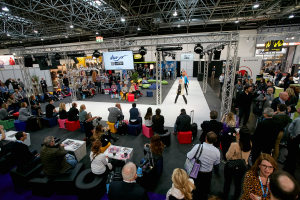 Textiles have been one of the main focuses of the PSI Show for years. In the form of the PromoTex Expo an own specialised show for promotion, sports and workwear is being launched.

D – The PSI Show will not only be staged from January 8-10, 2019 parallel to viscom, “Europe’s trade show for visual communications” as announced in October 2017. At the same time the premiere of the PromoTex Expo will also take place. The trade fair for promotion, sports and workwear that is also being launched by Reed Exhibitions picks up on the themes promotional textiles, team wear, corporate fashion, household and home textiles as well as textile customising. Textile manufacturers and distributors, importers and customising service providers will present their products and services. According to Reed Exhibitions, the largest consortium of events on the theme advertising and selling will thus come into being divided into the three autonomous fairs PromoTex, viscom and the PSI Show. Over 1,000 exhibitors and more than 20,000 trade visitors from all over the globe are expected to participate. “They thus cover the entire spectrum of visual, textile and haptic advertising and communication at international level,” commented Michael Freter, Managing Director of Reed Exhibitions Germany.

The Project Manager of the PromoTex Expo is the former TVP Chief Editor, Stefan Roller-Aßfalg, who has been working in the textile customising and promotion industry for almost 20 years. As a self-employed entrepreneur, Roller-Aßfalg will continue to hold the position of Director of the Academy for Textile Customising, under the roof of which he has been organising training and further educational offers for the industry for two years.

In the scope of the new trade fair trio, exclusively promotional products distributors and certified agencies will be granted access to the PSI Show. “By creating a dedicated textile advertising world – the PromoTex Expo – we are strengthening the exclusive character of PSI,” explained Freter. He added that particularly from the textile promotion sector the wish for an open trade area had been expressed, which goes beyond the limits of the PSI. Freter: “In the new structure, we are doing justice to both sides.” As such, in future PSI members have the opportunity to profit from the wide spectrum of all three shows. The PromoTex Expo and viscom are open to non-member international trade visitors.