CH – There is no question about it – the changes to the concept of this year’s edition of the marke|ding| Switzerland, definitely did the event good. A new venue, a modern location, a compact one-day event – all of this went down well with the visitors and exhibitors, the show was a total success. “Including the seven sponsoring agencies, who greeted their customers at stands in the foyer, we had 74 exhibitors in total here in the Samsung Hall in Zurich,” explained the organiser, Michael Mätzener, who was visibly satisfied with the event that received plenty of praise from both visitors and exhibitors alike.

The relocation from Lucerne to Zurich and from a sober exhibition hall to a modern event centre with the corresponding opportunities – striking: the huge screen and the sophisticated lighting effects – evidently had a positive impact: The exhibitors – a good mix of haptic advertising suppliers was offered – were almost run off the feet during the first hours of the show on March 6, 2018. 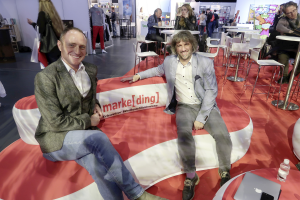 Satisfied faces among the makers of marke|ding|: in Austria Martin Zettl (l), in Switzerland Michael Mätzener. 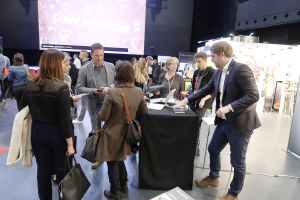 The exhibitors were virtually run off the feet especially during the first hours of the show.

There was a relaxed, friendly atmosphere, not only in the lounge, where the visitors relaxed and were able to enjoy – good – free coffee and snacks. The lecture programme, which focused on haptic advertising themes, was also well-attended. “We recorded a total of 972 visitors, which really is a total success and confirmation of our concept for this novel haptic advertising event in Switzerland,” summed up Mätzener. According to the official figures, 850 visitors attended the two-day event in Lucerne last year.

The diversified stands, that were by no means always uniform stands, but instead often extremely elaborately staged presentations that had been designed with plenty of attention to detail, were remarkable. The well thought-out planning by the organisers also underlined the professionally and intelligently implemented concept of the marke|ding| Switzerland. The next edition will once again be held at the Samsung Hall in Zurich in 2019, however the exact venue date has not yet been announced.