PL – The 14th edition of the RemaDays Warsaw was staged from February 7-9, 2018 at the Nadarzyn exhibition complex – approx. 30 km outside of the capital city – in Halls E and F. This location – where the show was now staged for the third time after being held at the crushed and totally cramped EXPO XXI exhibition grounds for years – really excelled again. As in the previous year, there was a free shuttle service from the Warsaw Main Station and from Chopin Airport that brought the guests directly to the exhibition grounds, in spite of spacious parking lots there were long queues of cars especially during the peak times. 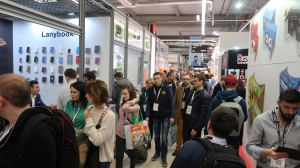 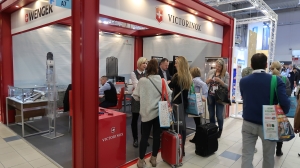 Once again the largest printing and promotional products show in Eastern Europe was able to record an increase in the number of exhibitors. Sławomir Giefing, CEO of the organisers, GJC International: “In total we had 810 exhibitors here at the show this year, which corresponded to a slight increase compared to the previous year.” In 2017, 768 exhibitors presented their products and services to the approx. 21,000 visitors. However recording an attendance figure of around 20,000 visitors, this year’s RemaDays in Warsaw experienced a slight decline in the number of visitors and was thus not able to repeat the constant course of growth of the past years. Nevertheless, the trade fair was “buzzing” and the exhibitors were satisfied with the outcome.

The supporting programme once again included the well-attended RemaKongress. The “Gifts of the Year“, “Prize for Innovation” and “Korony Reklamy” (Advertising Crowns) awards were conferred again this year. A “POS of the Year” award was presented for the first time.

On the initiative of several importers a hotel exhibition at the Warsaw Novotel was held parallel to the RemaDays. Most of the companies that exhibited there – had preferentially invited their domestic customers to attend, but at the same time also flew their flags at the RemaDays.