D – The Expo 4.0 opened its doors for the fourth time already at the Stuttgart Exhibition Centre and offered plenty of space for marketing ideas and advertising technologies in the promotionwear and haptic advertising sector from February 15-17, 2018. Every two years the trade fair organised by gmk & WNP Fachmessen presents four events under one roof: TV TecStyle Visions (textile customising and promotion), GiveADays (promotional products), POS Masters (marketing at the POS) and wetec (advertising technologies, luminous advertising and digital signage). Thanks to a new hall layout, according to the organiser the in total 13,700 (2016: 13,000) visitors were able to admire trends and novelties on space spanning 35,000 m² this year. 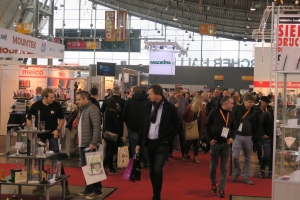 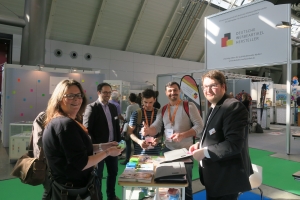 The original pillar of the trade show quartet is TV TecStyle Visions, which offered textile suppliers, wholesalers and the manufacturers of customising machines a platform for the tenth time already in 2018. According to the official figures, 270 exhibitors, 126 of whom came from abroad (2016: 256/101), presented their portfolios in Halls 8 and 10. The fashion show, the TV Expert Forum, the award ceremony of the Golden Shirt Award and the “fair-eco-bio” special zone that focused on sustainable production proved to be true crowd-pullers.

The fact that the audience in Stuttgart mainly comprised of textile specialists was not directly an advantage for all of the 566 exhibitors in total (2016: 575), however a constant flow of visitors poured into Hall 6 of the exhibition centre, where the promotional products show, GiveADays presented a wide spectrum of haptic advertising. In spite of the uniform stands, which formed a contrast to the in some cases impressive stand constructions in the other halls, the 128 exhibitors (2016: 127) from 11 countries – including manufacturers, importers, wholesalers and start-ups – succeeded in communicating the diversity of the promotional product. A lecture forum rounded off the extensive offer.