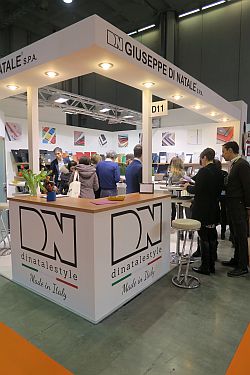 I – According to the official figures, more than 170 exhibitors participated in this year’s edition of the Promotion Trade Exhibition – PTE. The 18th edition was staged from January 24-26, 2018 as usual in Pavilion 3 of the Fiera Milano City. As was already the case last year, the show was organised by the Fiera Milano itself, which purchased the event from the founder, the Italian publishing company O.P.S, last year. The show was divided up into two large exhibition areas: in one the promotional products players and textile companies – the orange carpeted area – presented themselves, the second area was occupied by embellishing machines, special printing techniques for the customising of textiles; here a blue carpet was used to identify the zone. Furthermore, the Italian association, Assoprom made a special appearance under the suppliers of haptic advertising. A spacious zone, called the PTE Lab, was new this year and comprised of two sections, the first was dedicated to production or customising techniques and the second area to demonstrations and lectures as well as networking, embedded in workshops and seminars.

According to own accounts, the Fiera Milano succeeded in attaining a 16% share of first-time exhibitors, many of whom came from abroad. However, the odd renowned exhibitor was missing from the show. The official attendance figure was not available at the time of going to press (2017: 4,592 visitors), but the first day which the exhibitors criticised as being very slow, should have been compensated for by the well-attended second day and in some cases intense discussions held with competent visitors.