PPD Live: Less instead of more

PPD Live: Less instead of more 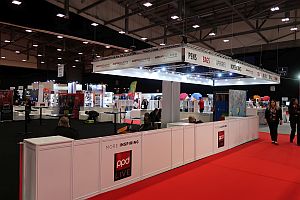 UK – Customer Focus, the organiser of the PPD Live, had promised “so much more” in the run-up to the show that was staged under the new name for the first time from January 16-17, 2018. Up until 2015 the event in Coventry, England was conducted as the Trade Only National Show and afterwards as the Promotional Product Expo for two years. In spite of the relaunch and contrary to the organiser’s announcement, ultimately there was no more to discover in Coventry than before. The number of exhibitors that has been declining for years dropped further in comparison to the previous year: According to the trade fair guide, 128 exhibitors (2017: around 200) were represented in the Ericsson Exhibition Hall of the Ricoh Arena, many big British suppliers were not present at the show. The share of international suppliers, however, remained constant and there were several first-time exhibitors.

Customer Focus itself had given the event a face lifting: The current branding in red couldn’t possibly be overlooked, nor could the new “Hospitality Area” in the lobby of the Hall. The seminar programme that had been announced earlier in 2017 didn’t take place, however Customer Focus held lectures in an own exhibition zone that provided information on its software services.

The organiser didn’t reveal the official number of exhibitors or the attendance figure, even on request, but the show did seem to be much less well-attended than in the previous years – an impression that many exhibitors confirmed. In 2017, approx. 2,000 promotional products distributors visited the event. It is doubtful whether Customer Focus met the target of around 3,000 visitors from the promotional products trade set for 2018. However, many exhibitors did praise the quality of the visitors and the organisation by the Customer Focus team.