D – There was neither emphatic euphoria nor bitter disappointment: This year’s PSI Show (January 9-11, 2018, Düsseldorf Exhibition Centre) recorded a slight drop in the number of exhibitors and visitors, but was nevertheless able to underline its special standing for the German and international promotional products market. According to the organisers, Reed Exhibitions, 925 exhibitors from 37 nations presented their products and services, 63 less than in the previous year. With according to the official figures 17,342 visitors, the figure was approx. 4% down on last year’s attendance of 18,094 visitors, the share of international visitors rose slightly from 57% up to 58%. The organisers reported the number of end customers, who visited the show on the third exhibition day on invitation of a PSI distributor to be 1,200. Last year at the premiere of the Industry Customer Day the figure had been quoted as being over 1,700 industry customers – as such the decline in the number of industry customers was around 30%. The fact that in spite of this many exhibitors maintained that they had welcomed more industry customers to their stands than in the previous year, may also be attributable to the changed layout of the trade show – the industry customers were able to enter the exhibition grounds from both entrances. 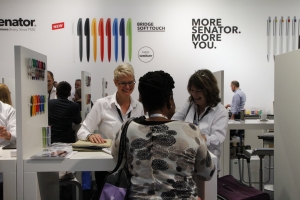 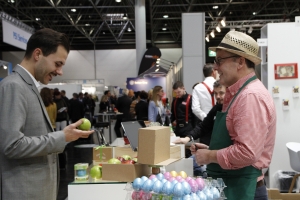 In the face of the overall economic situation and based on 2017 having been a successful year for the industry as a whole, a mood of confidence and serenity prevailed. Some of the visitors missed the vibrant flair of past years, instead however it was possible for many discussions to be held in a quiet atmosphere – quite a few suppliers registered for instance that the amount of orders for samples had increased. Overall plenty of business ruled as usual, and there was much experienced hustle and bustle. Accordingly, most of the exhibitors were satisfied, especially with the contents of the dialogues and to a large extent with the number of visitors too, whereby the first day of the show was rather slow at kicking off and the third exhibition day was very quiet after 4 p.m.

Noticeable: The professionalism of the stand presentations was even more pronounced than before and also the offer of products was convincing, both in terms of the diversity and quality of the items exhibited. The fact that unused parts of each hall had been divided off with ugly partitions and that some of the special zones had been decorated rather blandly didn’t fit in with the overall image at all.

Although several famous players were missing, the section of promotional textiles was strongly represented with around 200 exhibitors. Fashion shows were presented four times a day on the Catwalk that wasn’t extended this time. However, beyond this the experience character of the fair wasn’t as striking as in the past years. The exhibitors proved to be noticeably more reserved as far as campaigns in the aisles and at the stands were concerned too.

The themes sustainability, technical products, writing culture, drinkware and retro design stood out as strong trends. The array of fan items for the imminent Football World Cup was not as plentiful as anticipated.

The coming PSI Show is scheduled to take place in Düsseldorf from January 8-10, 2019, for the first time ever parallel to the Viscom, Europe’s trade show for visual communications. A detailed report on this year’s PSI Show will be published in eppi magazine No. 121 (February 21, 2018).