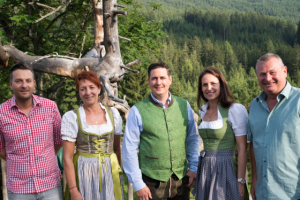 The new VÖW board (f.t.l.): Christopher Hitsch, Anja Neumann, Klaus Pohn, Kathrin Schneider and Wolfgang Kohout. The advisory board member Stefan Radlgruber is not on the photo.

A – There have been changes to the board of the Austrian Promotional Products Distributors Association (VÖW): After over 20 years, the President Konrad Godec, the Vice President and Secretary Gerhard Wagner as well as the advisory board member Günter Seybold stepped down from the board of the VÖW. They were replaced by the hitherto advisory board members Klaus Pohn (President), Kathrin Schneider (Vice President and Secretary) as well as Anja Neumann, Stefan Radlgruber and Christopher Hitsch as advisory board members. Wolfgang Kohout will continue to carry out his duties as Chief Financial Officer of VÖW for the next two years.

On the occasion of the 26th VÖW Summer meeting and the VÖW General Annual Meeting on June 22, 2017 in Wagrain, the entire executive board announced that it was stepping down due to personal reasons and handed over the reins of the association to the next generation: “We are very proud of what we have achieved over the past decades. Over this period of time, the VÖW has established itself as an important body on the German-speaking promotional products market. We are delighted that we are able to pass the association over to young, innovative hands and wish the new board all the best,” was the balance of Godec, Wagner and Seybold, who will support the board in the capacity of an extraordinary advisory board, which was the result of an unanimous vote.

Further themes on the agenda of the Summer Meeting included lecturing activities, the printing of the second VÖW product catalogue and the second cooperation with WU Vienna regarding surveys. The scientific cooperation with the local high schools and the VÖW certification that was introduced three years ago are to be continued. “We not only want to provide our members with important industry news, but also optimise the communications within the association. We are planning further events in the scope of the VÖW Event Academy in order to intensify specialised know-how and pick up on new themes, which will become relevant for our industry in future,” stated the new VÖW board looking ahead.