EVL: New Board of Directors

EVL: New Board of Directors 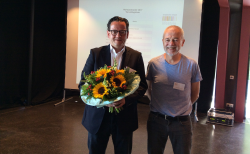 The new and the old EVL Chairman: Lars Adler (l) and Stephan Koziol.

EU – After 18 years Stephan Koziol, CEO of koziol, is handing over the chair of the EVL (European Lifestyle Association) to Lars Adler, CEO of Hoff Interieur. The members unanimously voted Adler to the position of Chairman at the general meeting held in Germany on June 9, 2017. Under the direction of Stephan Koziol the association has increased its membership up to 180 members representing a turnover volume of more than 2.5 bil. Euros.

The EVL is a network of family businesses from the living, gifts, furnishing and tableware segments.