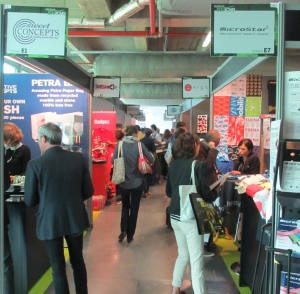 F – The fifth edition of the Premium Sourcing took place in the “Docks en Seine – Cité du Mode et du Design“ in Paris on September 2 and 3, 2015. The trade fair is jointly organised by the French industry service providers, 656 Editions and European Sourcing and offers French promotional products distributors and international suppliers an information and contact platform in the heart of the French capital.

The official figures regarding the numbers of exhibitors and visitors were not available at the time of going to press. Around 120 exhibitors presented their products and services at uniform stands in the stylish industrial ambiance of the Fashion and Design Centre on the banks of the Seine. At least half of the suppliers came from abroad, which underlines the significance of the show for international players, who would like to operate on the French market. After very good attendance on the first day, the second day was a little quieter, which was undoubtedly due to the fact that 1,000 tractors of protesting farmers caused chaos on the roads of Paris. In spite of this, both the organisers and many of the exhibitors were satisfied with the outcome of the trade show. Particularly the high quality of the contacts and the professional organisation of the trade show were frequently praised.