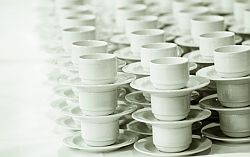 EU – As announced by the European Commission on May 15, 2013, the definitive anti-dumping duty on crockery and other ceramic tableware and kitchen items made in the People’s Republic of China is 36.1%. This regulation applies for all Chinese manufacturers.  On November 16, 2012 the Commission had imposed duties of between 17.6 and 58.8% in the form of a provisional regulation. A lot of porcelain importers in the promotional products industry were affected by the maximum rate.

Hence, the European promotional products umbrella association, EPPA (European Promotional Products Association) had addressed the European Commission and after several hearings, which were in some cases attended by all of the EPPA member countries, lodged an appeal.

The EPPA considers the fact that the definitive duty is actually much lower than originally planned to be a success for their own lobby work: “We are proud that the EU Commission heard all of our arguments and has lowered the duty from 58.8 down to 36.1%. This is a big step forward in being recognised as a trade association”, stated EPPA President, Hans Poulis.